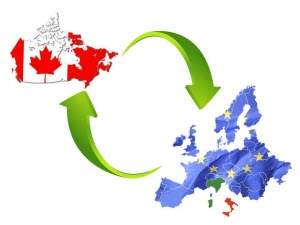 Fungal diseases in cereal crops are a global preoccupation, as they not only threaten worldwide cereal production but could also cause public health and international trade issues. To foster knowledge sharing and strengthen scientific cooperation, two of Agriculture and Agri-Food Canada’s research centres (the Eastern Cereal and Oilseed Crops Research Centre in Ottawa, and the Food Research Centre in Guelph) and the Italian Agricultural Research Council (Consiglio per la Ricerca e la sperimentazione in Agricoltura – CRA), are collaborating on the initiative: "Twinning Italy-Canada activities in Research and Innovation in the Agri-Food Area".

What is a twinning initiative? When two countries share a common priority, such as food safety, they discuss potential areas of collaboration and choose a project that is most complementary to their mutual interest and with specific research lines developed by each country’s scientists.

In 2008, during a bilateral meeting between Canada and Europe in Brussels, MYCORED had been identified as a priority area of common interest that could lead to the development of a twinning initiative. MYCORED is a European Union project funded through Framework Program 7th aimed at developing novel integrated strategies for worldwide mycotoxins reduction in food and feed chain and is led by the National Research Council in Italy (CNR).

In September 2009, Agriculture and Agri-Food Canada (AAFC) and Italy’s National Research Council signed a memorandum of understanding. Between 2009 and 2010, during several bilateral meetings and one round table involving Canadian and Italian ambassadors, as well as scientists from both organizations, potential twinning opportunities were discussed.

In December 2010, an Italian delegation participated in a workshop on mycotoxins organized in Ottawa. This event gave AAFC and CRA crop genomics scientists the opportunity to further interact and agree on the twinning of the three following research topics:

To support CRA’s scientists in the development of this twinning initiative, the Italian Ministry of Agricultural, Food and Forestry Policies invested 1 Million Euros (about $1,505,400 Canadian dollars) over a two-year period (2011-2013). In Italy this project is also referred to as the "CANADAIR project".

Canada was chosen by MYCORED to host the 5th International MYCORED Conference in June 24-28, 2012, at Carleton University, in Ottawa. This event, organized with extensive participation by AAFC’s scientists, brought together more than 200 scientists from academia, government and industry, as well as government officials and farming organizations from 27 countries. The conference helped to further identify science issues and gaps and emphasized the need to improve methods to reduce mycotoxins in food and feed.

Results on the Twinned Research

Under Material Transfer Agreements (MTA) in place between Canada and Italy, scientists exchanged germplasm lines of corn and wheat and studied resistance to the fungal disease fusarium head blight, or FHB. In May 27-30, 2013, in Martina Franca, Italy, both countries presented the mid-term results of their collaboration at the last international MYCORED conference. MYCORED officially ended on March 31, 2013.

Research scientists from Canada and Italy are using genomics tools to understand wheat resistance to FHB. Drs. Thérèse Ouellet and George Fedak identified and characterized the phenotype of a novel form of resistance to FHB in wheat. By using next generation sequencing technology, their Italian counterparts will help them characterize the molecular mechanisms of that resistance by comparing the complete gene expression profile of sister lines carrying or not the novel resistance trait. The molecular analysis should help them identify genes associated with the novel resistance trait and convert those into DNA markers for breeders who would use them in their breeding programs. These DNA markers should facilitate the development of wheat varieties with superior resistance to FHB and reduce mycotoxin contamination in food and feed.

AAFC and CRA researchers are also using genomic tools to dissect maize disease resistance. Canadian scientists are trying to understand the basis of maize resistance to gibberella ear rot caused by Fusarium graminearum, while Italian researchers are studying maize resistance to Fusarium ear rot caused by the fungal pathogen Fusarium verticillioides. Although these fungi are related they produce different sets of mycotoxins; grain infected with F. graminearum is contaminated with DON and zearalenone, while F. verticillioides infection leads to fumonisin contamination. To explore whether common resistance mechanisms can be identified in response to these two pathogens, researchers have exchanged seed and have grown each other’s susceptible and resistant maize lines during two field seasons. By using next generation sequencing technology they will compare what genes are expressed in response to each pathogen and should be able to provide DNA markers to breeders to track key resistance genes in their breeding programs. These DNA markers should help produce maize with broad resistance to fungal pathogens and reduce mycotoxin contamination lev in food and feed.

3 ‒ Control of Mycotoxins in Livestock

Canadian and Italian scientists are developing innovative strategies for the control of mycotoxins in livestock. Canadian researcher Dr. Ting Zhou has discovered bacterial strains that are able to significantly reduce the toxic compounds of certain Fusarium mycotoxins and demonstrated that detoxification of the mycotoxins in feed can significantly reduce the mycotoxin effects on tested animals. Italian researcher Dr. Domenico Carminati identified lactic acid bacteria capable to inhibit mycotoxin producing fungi with capability of decontaminating mycotoxins, and his colleague Dr. Fabio Abeni evaluated the effectiveness of mycotoxin adsorbent by assessing the impact of mycotoxins on cow physiology at different growth stages.

In the context of Horizon 2020, the new European Union research funding program, a proposal was put forward to reconduct MYCORED international conferences.

In October 2013, the Italian Embassy in Canada, in partnership with the Université de Montréal and the University of Toronto, the Canadian Institutes of Health Research, and Canada’s Public Policy Forum, organized a symposium on food and innovation.

With the global need to increase food production in a safe and sustainable way, there is great potential for Canada and Italy to expand their collaboration in the area of human nutrition and animal production.

For further information about the Italy-Canada twinning initiative, please contact Dr. Sara Sarkar at the International Engagement Division at aafc.info.aac@canada.ca.