Winterfat - Packed with protein for fall and winter grazing

Winterfat is a native rangeland shrub that grows in the mixed grassland ecoregion of the Canadian Prairies. It is valuable for its high quality nutritional components that both domestic livestock and wild animals find very palatable. As a result, winterfat is preferentially grazed and can potentially be eliminated from a pasture. Overgrazing and range management strategies such as fire suppression that limit natural disturbances have resulted in decreased winterfat populations over the last couple of centuries.

For producers interested in (re)establishing winterfat in their pasture, the following is Prairie-specific information on seed source, seed mixes and seeding recommendations based on research by Agriculture and Agri-Food Canada (AAFC) research scientist, Dr. Mike Schellenberg, at the Swift Current Research and Development Centre in Swift Current, Saskatchewan.

At first glance, winterfat may be mistaken for sagebrush (hence its other common names) but it lacks the distinct “sage” odour when its leaves are rubbed.

Historically, winterfat played an important role for the livestock industry. Cattle drives from Texas to Saskatchewan in the 1800s followed the winterfat stands for forage. Early ranchers planned their winter pastures and grazing rotations based on the presence of this valuable plant.

As well as using winterfat as a winter forage for their horses, some First Nations used it to heal burns, sores, rashes and boils; treat fever; relieve sore muscles; and prevent grey hair.

Winterfat is considered a protein powerhouse for fall and winter grazing! Winterfat delivers more than enough protein and phosphorous to satisfy livestock needs throughout the fall and winter, even lactating cows, offsetting the lower nutrient levels of the dominant grasses in the mixed grassland prairie. Protein levels peak at 15% in the spring, holds steady at 14% into the fall and varies between 8% and 11% through the winter months. The organic matter digestibility (OMD) stays relatively constant throughout the year, between 55% and 65%.

Winterfat thrives under rotational grazing systems. It has greatest productivity if grazed as a winter or early spring forage. When grazed before June, winterfat can regrow to pre-grazing size by the end of summer. If winterfat is grazed from June to August, recovery is delayed and may require a full year of rest (that is, not grazed) to recover its full annual productivity potential. Under continual grazing, abundance and productivity declines. 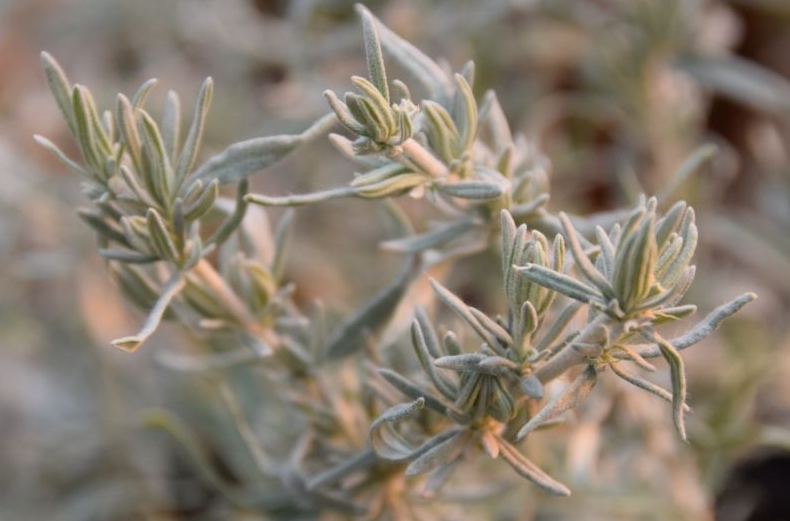 Winterfat grown from locally sourced seed from the Canadian Prairies or Northern Great Plains has a better chance of establishing and surviving in Western Canada than plants grown from seed sourced from farther south. Plants grown from northern seed have high survival rates, good forage yields and produce potentially commercial quantities of seed. Securing a northern source of type winterfat seed may be a challenge however. Start by contacting seed growers specializing in native plants. The Prairie Conservation Action Plan has a list of native plant and seed vendors.

Just as important as source is freshness: winterfat seed viability can decline by as much as 50% after just one year of storage.

Winterfat for forage production should not be seeded as a monoculture but in a mix along with a nitrogen fixing legume and a non-aggressive grass. Research has shown that seeding a diverse plant species mixture can increase forage productivity, potentially extend the grazing season and improve stand resilience to stress caused by disease, pests, heat, drought, etc.

Seed ratios can be adjusted in the mix to suit individual needs or desired results. For best results, winterfat should make up 20 to 35% of the seeded pasture.

Broadcast the seed-mix at the recommended rate of 300 pure live seed (PLS)/m2 = ~30 PLS/ft2. The seed should have bracts intact to improve the overall germination and higher plant establishment numbers. After broadcasting, harrow lightly to just cover the seeds. Seed should be no deeper than 6 mm (0.25 in.).

Using a seed drill is not recommended as the hairy seeds do not flow well through the drill. Removing the hairy bracts to improve flow may result in lower viability with lower germination rates and reduced plant stand establishment.

Late fall seeding is best, when the soil temperature is below freezing, to prevent germination. Sowing in late fall also reduces the loss of seed viability that occurs under storage conditions. Spring seeding is possible but must be done very early to take advantage of the early spring moisture.

The cost of beef production can be reduced by more than 50% by wintering cattle on pasture rather than feeding them with hay. Economically, it is beneficial to have high-quality, late season forage available to extend the grazing season.