Potatoes with coloured flesh may promote health - A rainbow of colours that are good for you, too

Our potato research team works closely with producers and food processors to develop potato varieties that are better suited to Canadian growing conditions, to modern production methods and to potato processor and consumer requirements. Emphasis is given to improved disease and pest resistance for sustainable production.

Research taps into the vast genetic diversity that exists in the potato and its close relatives. Potato researchers in Fredericton have started to evaluate what they believe are the health-promoting attributes of potatoes that have brightly coloured flesh and skin.

The selections under evaluation can be broadly divided into two groups. The first are old heritage cultivars often maintained by home gardeners. These cultivars are also preserved in vitro (i.e., as living plant material) in a node of Plant Gene Resources of Canada. These blue fleshed cultivars have fanciful names such as Congo, MacIntosh Black and All Blue. 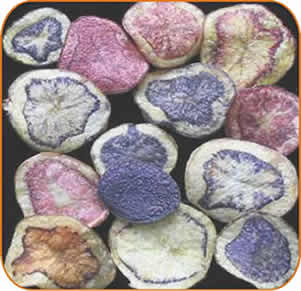 A second category of material holds even greater potential. It stems from primitive germplasm that has been used in the PRC's potato breeding program for years. Within the collection are a number of selections that have coloured flesh ranging from light streaks of colour to intensely pigmented flesh in shades of yellow, red or blue. These materials have been used to study the inheritance of pigmentation in flesh and skin of potatoes and have been adapted to form tubers under Canadian latitudes.

Besides being eye catching and looking good on the plate, potatoes with pigmented skin and flesh are rich in flavonoids such as anthocyanins and phenolics. These powerful anti-oxidants are purported to have health benefits ranging from delaying eye degeneration to the prevention of heart and blood diseases, cancer and aging. Found throughout the plant kingdom in fruits and vegetables like blueberries and spinach, a diet rich with these compounds is beneficial to good health. Coloured potatoes may be an economical source.

Breeders have made crosses and are now at work to identify selections that combine high flavonoid levels in the progeny with acceptable standards for agronomic performance, quality and disease resistance. In field studies currently under way at PRC Fredericton, seedling families from these crosses are being grown and evaluated. Over several years the best selections will advance to larger-scale evaluations to identify potential new cultivars for commercial production. 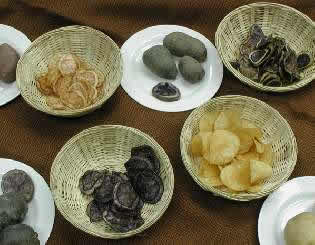 At the same time in the laboratory, a team of AAFC biochemists is performing chemical analyses on tuber extracts to quantify their capacity to reduce the formation of oxygen radicals which have been implicated in human cell damage. And, because anthocyanin dissolves in water and since potatoes are usually cooked before eating, the preparation method may influence flavonoid levels retained after cooking. More research will measure levels after boiling, steaming, microwave cooking and frying.

Researchers are hopeful that field and laboratory findings will warrant further trials and eventual release and registration of coloured flesh potatoes for the benefit of industry and consumers.

The potato is the most important vegetable crop in Canada, accounting for 35% of all vegetable farm cash receipts. Canadians consume about 71 kg per capita - about the same amount as the combined total of all other fresh vegetables consumed. 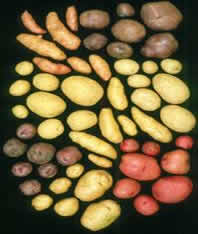 The Potato Gene Resources repository is Canada's national gene bank for potatoes. It maintains over 100 potato selections of scientific and historical interest and relevance to Canadian agriculture. The repository is located at the Potato Research Centre in Fredericton. It is one node in AAFC's national system of gene banks which are coordinated through Plant Gene Resources Canada at the Saskatoon Research Centre.

Potato germplasm in the repository is diverse and includes most Canadian bred cultivars (many no longer in commercial production), heritage cultivars and selections used in genetic research.

Potatoes from the repository are requested by scientists and plant breeders in Canada and around the world. They are used to evaluate disease resistance, as well as for developing breeding and genetic lines for research and new commercial cultivars. For more information, please contact the repository's Curator, Dr Benoit Bizimungu (benoit.bizimungu@canada.ca), at 506-452-4826.