Fusarium Dry Rot and Seed Piece Decay in the Maritimes

Fusarium spp. are important pathogens of potato that cause yield losses at planting and in storage following harvest. Seed potatoes infected with Fusarium can rot after planting (seed piece decay), causing "misses" in the field. Even if plants grown from infected seed do emerge, they often have reduced vigour and yield. The fungus can spread from infected to healthy seed during the cutting and handling process. After harvest, Fusarium spp. cause a dry rot in storage, which reduces crop quality.

Spores of the fungus are found in all soils where potatoes are grown and can survive for many years. Agriculture and Agri-Food Canada scientists at the Charlottetown Research and Development Centre Crops are studying this devastating disease and are developing effective disease management options. Preliminary results of their research are presented here.

Potatoes infected with Fusarium spp. develop a spreading external decay that usually becomes shrunken and wrinkled in appearance. When diseased tubers are cut open, the brown decay can be seen spreading into the internal tissues of the tuber. The internal decay is usually marked by open cavities which contain the white mycelium of the fungus. Fusarium spp. can only infect potatoes through wounds. Thus, infection can occur when inoculum is spread from diseased to healthy seed during seed cutting and handling. As well, inoculum in soil attached to the surface of tubers can infect potatoes through wounds made during harvest and handling operations prior to storage.

Although spores of Fusarium spp. can be found in all soils where potatoes are grown, research at the Centre in Charlottetown has shown that diseased seed is the most important source of inoculum to infect daughter tubers. High levels of seed infection do not always translate into high levels of dry rot in storage, because the amount of tuber wounding at harvest is normally the biggest factor determining post-harvest dry rot. However, high levels of seed infection can lead to signifcant seed piece decay with resulting yield impacts.

Fusarium species in the Maritimes

Research has shown that the predominant Fusarium species found on seed pieces provide inoculum for infection of daughter tubers and therefore, these species are also the predominant ones found in storage. Surveys from 2001 to 2006 in the Maritimes indicate that three Fusarium spp. are the most important as causal agents of seed piece decay and dry rot. Results from the survey showed that Fusarium sambucinum was predominant in 40 to 70% of tuberlots, Fusarium coeruleum in 20 to 40% of tuberlots and Fusarium avenaceum in 10 to 20% of tuberlots. Although mixed infections of several Fusarium spp. did commonly occur, one species was usually clearly predominant in a particular sample of tubers (either seed tubers or samples taken from storage). Some minor Fusarium spp. that were pathogenic to tubers were also recovered in the surveys including Fusarium crookwellense, Fusarium sporotrichioides and Fusarium oxysporum. 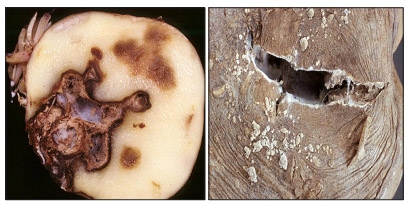 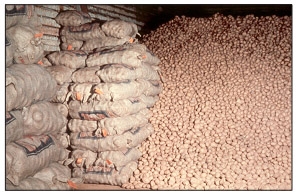 Knowing the predominant Fusarium spp. in a particular seedlot could provide growers with important information to use to make disease management decisions. Thus, diagnostic testing of samples of tubers from seedlots could be a useful tool in the management of this important disease. Fusarium spp. grow relatively rapidly in artifcial culture, so isolations from diseased tubers could yield cultures in 7 to 10 days that could be examined morphologically for identification. Alternatively, more sophisticated molecular, DNA-based methods could be employed for faster, more accurate results.

Ultimately, the management of Fusarium dry rot and seed piece decay depends upon an integrated approach that takes advantage of a number of control options and information generated by research studies. A summary of some of these control options would include:

At harvest and in storage