Deep in the mountains of the northern Norwegian islands, there lies a vault that holds thousands of seeds from all over the world.

Established in 2008, the Svalbard Global Seed Vault is located on the island of Spitsbergen, about 1,300 km from the North Pole. This giant, secure vault, stores small amounts of seed duplicates of collections from around the globe right in the permafrost, safeguarding them from permanent loss. If a particular seed sample is lost due to any disaster from the depositing collection, the duplicate seeds from the vault could be used to re-establish it and help preserve genetic diversity of the world's crops for future generations.

The Svalbard Global Seed Vault stores many duplicates from Canada's own Plant Gene Resources of Canada (PGRC) which is the national seed genebank located at the Agriculture and Agri-Food Canada (AAFC) Saskatoon Research and Development Centre. PGRC maintains a collection of more than 115,000 different samples (or accessions) of cultivated plant species and their wild relatives. As an active national genebank that has the capacity to regenerate, assess, acquire and distribute plant genetic resources for food and agriculture, PGRC is a Canadian contribution to ensuring global food security, and economic and ecological sustainability of agriculture. Not only are famous Canadian wheat cultivars such as 'Red Fife' and 'Marquis' preserved, but also local varieties important to regions across Canada.

Depositing a small back-up sample (between 300 to 500 seeds) of Canadian crops at Svalbard is a security measure the PGRC is happy to take. The diversity of food crops is under constant pressure and the consequence of not having backups could be an irreversible loss of the opportunity to develop crops adapted to climate change, new plant diseases, and the needs of an expanding population. Priority is given to crop groups that are unique to PGRC from a world-wide perspective and the crop groups most important to Canada.

Since 2008, PGRC has sent seed samples of 31,963 accessions, representing 377 plant species. 80% of the seed samples PGRC has sent to Svalbard are from cereal crops, however they also include a range of other crops such as grain legumes, forages, corn, soybeans, sunflowers and flax.

Successful shipping and storing of the samples depends on close cooperation between PGRC, the Global Crop Diversity Trust located in Bonn (Germany), and the Nordic Genetic Resource Centre located in southern Sweden, which makes this a truly international effort.

On February 26, 2018, the SGSV celebrated its 10 year anniversary by accepting a special Anniversary Deposit from 23 genebanks. A total of 967,216 unique samples of crop varieties and crop wild relatives are now backed-up in the Vault which has a capacity for 4.5 million samples. At an average of 500 seeds per sample, it could ultimately store 2.5 billion seeds. As it works to build the collection, priority is being given to crops that are important for food production, sustainable agriculture, biodiversity, and climate adaptation.

In Saskatoon, PGRC regenerates, describes and stores the base and working collections of the seeds which are available to research and plant breeders nationally and internationally. Besides the seeds, PGRC provides access to information about the seed material via AAFC's website, and scientific publications. 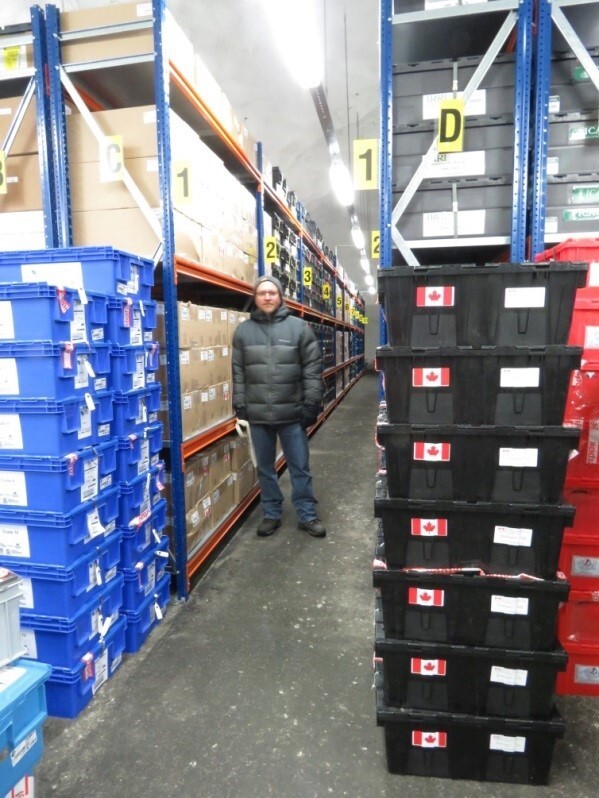