Working together to keep African swine fever out of Canada 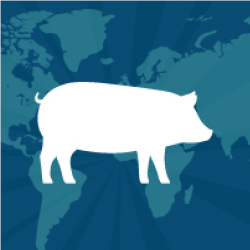 African swine fever (ASF) is a highly contagious, viral pig disease with no available treatment or vaccine. It has been spreading rapidly through parts of Europe and Asia since 2018, quickly becoming a major threat to the global pork supply.

Recognizing this threat, the federal government has undertaken prevention and preparedness activities in co-operation with the provinces and pork industry to protect Canada's hog population and the economy.

Over the last year, advances have been made in disease surveillance and border security. In March, the Government of Canada announced an increase in the number of detector dogs at Canadian airports, at a cost of $31 million to help prevent illegally imported meat products from entering the country. In April, Canada hosted the first ASF Forum, which provided participants with better understanding of the important issues, enabling decision makers to focus their attention on regional collaborations to strengthen efforts to prevent and respond to an outbreak of ASF in the Americas. Canada already has zoning arrangements with the United States (US) and European Union (EU) that could allow trade to continue in the event of an outbreak and is now engaging Japan and other countries to set the stage for future arrangements.

Federal, provincial and territorial ministers of agriculture met in late 2019 to discuss prevention, preparedness, response and recovery planning to ASF, which is a shared responsibility. They agreed on the importance of strong biosecurity protocols to prevent ASF from entering Canada.

Everyone has a role to play in preventing ASF: find out how you can prevent diseases from developing and spreading on your farm and join the conversation with Canadian Food Inspection Agency (CFIA) on Facebook and Twitter.