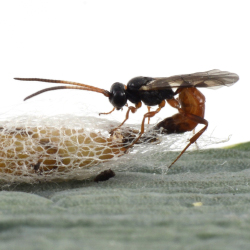 Using "good bugs" to control "bad bugs" is an eco-friendly option that farmers can adopt to reduce their use of chemical pesticides. As well as being safe for the environment and good for Canada's biodiversity, these "good bugs" (known more scientifically as biological control agents) also save farmers time and money. An example is parasitoid wasps.

These wasps lay their eggs on or in the bodies or pupae of other insects. When the eggs hatch, the larvae feed off the host, eventually killing it. Parasitoid wasps can be very picky about where they lay their eggs, and are often interested in only one type of insect host. This choosiness is a very useful trait if you want to get rid of a specific pest without negatively affecting other beneficial insects, like pollinators or butterflies.

Dr. Andrew Bennett, a taxonomist at Agriculture and Agri-Food Canada's (AAFC) Ottawa Research and Development Centre, is carefully studying parasitoid wasps to identify new species that target different "bad bugs" as hosts. Discovering which wasps target which hosts is a challenge because there are thousands, if not millions, of different species of wasps.

The first step is to identify which wasps are parasitoids. Dr. Bennett then focuses on the specimens that we already know are beneficial for agriculture. He studies their traits and uses the information to build a "tree of life"— essentially a family tree for parasitoid wasps.

He then turns his attention to new parasitoid wasps whose potential benefits, such as their preferred egg host, are unknown. Using taxonomy, he can deduce where in the tree of life the new wasp fits, and which other parasitoid wasps it is most closely related to. Scientists can then narrow down the possible types of host the new wasp will use, as wasps that are physically similar are more likely to prey on similar food sources.

Once a potential host is found, testing is done to ensure the wasp will only attack the targeted "bad bug" and no others. If all goes well, the wasp can be officially released. To date, Dr. Bennett and his colleagues have identified wasps that attack onion, lily and ash tree pests. These parasitoid wasps have now become great biological tools that farmers, foresters and gardeners can use to help protect their plants.

AAFC is proud to support Canadian farmers as they adopt sustainable farming practices.

Additional information about the Canadian National Collection of Insects, Arachnids, and Nematodes (CNC) can be found online.