Health and Wellness Series: Organic Trends in the United Kingdom

Modern grocery retailers continued to be the leading distribution channel for organic products in 2016. Private labels continued to account for the largest share of the organic market and currently cover the majority of organic packaged food categories.

The HW sector grew at a 2.2% compound annual growth rate from 2012 to 2016, with retail sales amounting to US$28.1 billion in 2016. The continued interest in achieving a healthier lifestyle amongst UK consumers is driving the prevalence of HW packaged food and beverages in the United Kingdom. During the review period, the HW sector made up 22% of packaged food retail sales and 51% of beverage sales.

Organics made up 6% of the HW sector in the United Kingdom, with retail value sales amounting to US$1.6 billion in 2016. Despite rising scepticism, organics posted a compound annual growth rate of 2% from 2012 to 2016. When economic conditions are good, UK consumers are willing to pay a premium for organic products. However, when the economy is unfavourable, UK consumers are more likely to cut back on purchases of organic products than on purchases of any other type of HW products such as fortified/functional and free-from products.

The United Kingdom economy registered low real GDP growth of 1.8% in 2016 and is expected to grow by 1.0% in real terms in 2017, mainly due to uncertainty caused by Brexit (Euromonitor, 2017). Despite this uncertainty, consumers continue to spend on food and beverages considered beneficial to health.

Demand for organics has dampened in the past few years as consumers are unconvinced about the health benefits of organic products and are put off by their high unit prices. Owing to these factors, organic products such as beverages remain a niche market in the United Kingdom and are more likely to be affected by poor economic conditions.

According to Euromonitor, prospects of higher inflation are expected to lead to a more cautious approach towards spending among UK consumers over the early years of the forecast period. One of the key issues for the organic packaged food and beverages in the forecast period will be the way in which the United Kingdom negotiates its exit from the EU. It’s likely that sales of imported products could be affected in the long term as unit prices could increase while products from the EU may need to meet additional requirements imposed by local organizations before they can enter the domestic market (Euromonitor, 2017). 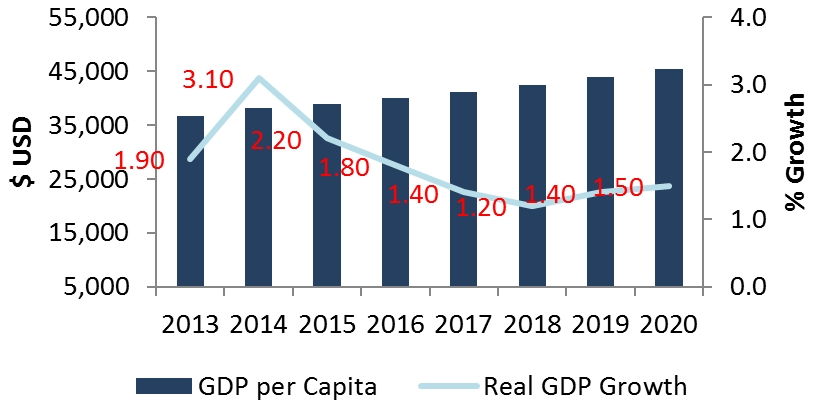 In 2016, organic packaged food represented 86% of overall organic retail sales, while organic beverages made up 14%.

Organic packaged food continued to record a positive sales value of US$1.4 billion in 2016. According to Euromonitor, this is due to the increase of independent suppliers who account for an increasing share of the market.

Although the organic packaged food category is expected to post positive growth during the forecast period, the negotiations related to the United Kingdom’s exit from the EU could present challenges for the category. The anticipated increase in prices of imported products could lead to a slowdown in the category in the long term.

Organic beverages remain a niche market in the United Kingdom. According to Euromonitor, UK consumers are unconvinced and put off by the high unit prices and shorter shelf life of organic beverages. As a result, the category continues to be threatened by other HW categories such as naturally healthy products. These products are positioned at lower unit prices and will be the main threat to organic beverages over the forecast period (2017 to 2021).

The category recorded a low compound annual growth rate of 0.4% from 2012 to 2016 and a retail sales value of US$217.9 million in 2016. By 2021, the retail sales value is expected to increase to US$245.7 million. Organic soft drinks, specifically fruit/vegetable juice and organic 100%, are the most popular subcategories, followed by organic tea.

Modern grocery retailers continued to be the leading distribution channel for organic products in 2016. Supermarkets and hypermarkets led the way with a 68% share of the sales value, followed by independent small grocers with a 12.9% share and internet retailing with a 6.7% share. Although organic sales continue to grow in grocery stores, the increase in independent suppliers (that is, flea markets) and the broadening of retail channels such as online shopping are boosting sales of organic products in the United Kingdom.

In 2016, private-label products made up 33% of the total value sales of organic products. They recorded a slight decrease in growth with a compound annual growth rate of 0.8% (2012 to 2016) as bigger brands maintained or increased their share slightly after their unit prices were lowered (Euromonitor, 2017). However, private labels continue to account for the largest share of the organic market and cover the majority of organic packaged food categories, especially the processed meat and seafood categories, where they have a greater presence (Euromonitor, 2017).

According to Euromonitor, Belvoir Fruit Farms maintained a leading position in the organic beverages category in 2016. The company’s products continued to grow in popularity and benefited from an expanded distribution network, including delicatessens, farm shops, wholefood stores and food halls around the United Kingdom (Euromonitor, 2017). Hipp UK and Ella’s Kitchen were the two leading players in the baby food category (Euromonitor, 2017).

In the review period (2012 to 2016), UK consumers showed a preference for domestic organic products. This is attributable to recent food scandals (that is, horsemeat scandal) and lower pricing of domestic products (Euromonitor, 2017).

According to Euromonitor, in order to justify the higher unit prices and differentiate their products from conventional products, organic producers are creating a high-end image for their products, especially for organic beverages. They are using a number of strategies, such as bright, eye-catching packaging graphics and a variety of materials suggesting a fresh, clean, and natural image. In addition, organic producers are emphasizing product sustainability, ingredient source, and packaging recyclability. Over the last five years, convenient packaging, hormone-free, and caffeine-free have been the fastest growing claims used on organic products in the United Kingdom (Mintel, 2017).

Number of organic product launches in the United Kingdom, from 2012 to 2016

Top organic products launch categories in the United Kingdom, from 2012 to 2016

An important factor that will have a positive effect on Canadian organic exporters’ competitiveness in the United Kingdom is the Canada-European Union Comprehensive Economic and Trade Agreement (CETA).

It can support you by:

International Trade Commissioners can provide Canadian industry with on-the-ground expertise regarding market potential, current conditions and local business contacts, and are an excellent point of contact for export advice.

For additional intelligence on this and other markets, the complete library of Global Analysis reports can be found on International Market Intelligence arranged by region:

© Her Majesty the Queen in Right of Canada, represented by the Minister of Agriculture and Agri-Food (2017).

All photographs reproduced in this publication are used by permission of the rights holders.

All images, unless otherwise noted, are copyrighted to Her Majesty the Queen in Right of Canada.

The Government of Canada has prepared this report based on primary and secondary sources of information. Although every effort has been made to ensure that the information is accurate, Agriculture and Agri-Food Canada (AAFC) assumes no liability for any actions taken based on the information contained herein.

Agriculture and Agri-Food Canada provides this document and other report services to agriculture and food industry clients free of charge.