Since the mid 1980's the adoption of no till and reduced till in Canada has increased dramatically, especially in the prairie region. No till essentially involves eliminating all tillage operations, and placing seed, fertilizer or manure with minimal soil disturbance. Other terms used to describe the practice are zero tillage and low disturbance direct seeding.

Reduced till is a reduction in tillage from what was conventionally practiced. This is harder to define, because the degree of reduction can vary and the definition of conventional has changed over the years. It could be argued that conventional tillage on the prairies today may have been considered reduced tillage prior to the 1980's. Other terms that also describe reduced till are minimum tillage, conservation tillage, and high disturbance direct seeding.

No till and reduced till benefits

The benefits of no till and reduced till are numerous and well documented. They include:

No till and reduced till challenges

Further increases in adoption are likely, but there may be some constraints that limit this to well below 100%. It is also conceivable that producers who practice no till may not be able to implement the practice every year. This is supported by a Prairie Farm Rehabilitation Administration (PFRA) survey of over 4000 fields in Saskatchewan. By looking at the same fields every year from 1997 to 2002 it became evident that a considerable number wavered between different tillage systems during this time.

In 2005 PFRA conducted a series of 10 meetings with no till producers across Canada to identify challenges that may constrain them in maintaining a no till system. Many of the issues identified were also considered obstacles for conventional tillers to initiate a change to no till. Some constraints arise from specific soil/land/climatic features that are beyond the control of a producer. Others may be related to specific management or farming system scenarios that are controlled by the producer. The issues described below are not an exhaustive list, but represent some of the major ones identified by producers.

Too much crop residue can result in spring seeding delays and/or poor germination due to a slower rate of soil drying and warming. It can also impact the ability of low disturbance equipment to successfully clear trash without plugging, accurately place seed and fertilizer in the soil, and provide effective seed packing. Slower rates of soil warming and drying can persist after seedling emergence and result in reduced vigour, and increased susceptibility to frost damage or disease development. Excess residue can result in increased immobilization of nitrogen, which is required for healthy seedling growth and development.

The above problems are common with most cereal crop residues grown in humid or irrigated areas. Flax straw provides a special challenge due to its slow rate of decomposition and poor trash clearance characteristics. Excessive crop residue problems can increase after a number of years of continuous no till due to the build up of a thatch layer of partially decomposed crop residue at the soil surface. This thatch layer is usually worse in humid areas, but can also develop in semi arid climates.

Successful no tillers are aware of the importance of good residue management during harvest. This includes effective chopping and spreading of straw across the entire width of cut. A post harvest harrow operation on a dry day can further improve residue conditions that are more conducive to subsequent seeding. Baling or grazing of crop residues can help to remove excessive amounts. Seeding equipment technology continues to develop improved trash clearance and seed placement capabilities. There has also been some progress to develop crop varieties that produce less residue, and/or are more tolerant of cool and wet conditions at seeding time. Increasing the frequency of pulse and oilseed crops in rotation with cereals and flax, will slow down residue and thatch layer build up. 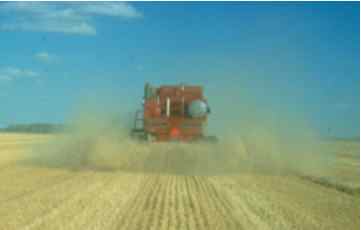 Even when implementing all of the above, an excessive residue problem may remain, especially the thatch layer. Therefore, occasional tillage may also be required to mix excess surface residue with soil to a greater depth.

Excess moisture and cooler soil temperature can occur even when there is no excess crop residue, and still cause many of the same negative impacts associated with excess residue. Excess moisture can also cause soil trafficability problems and result in plugged seed runs, over packing, and formation of wheel ruts. These conditions occur rarely in semi arid regions, but are more common in humid regions. Clays and other poorly drained soils experience excessive moisture and cooler temperatures more often than sandy and other well drained soils.

No till conserves moisture which is especially important in semi-arid regions, but in humid areas can contribute towards the development of excess moisture and cooler soil temperature. In humid areas tillage has traditionally been used to dry out and warm the soil through its ability to temporarily increase surface roughness, evaporation, drainage, and exposure to sunlight. Discretionary tillage is also required to smooth out ruts created by field equipment during poor trafficability.

Inclusion of fall seeded crops and perennial forages in the crop rotation will utilize more early spring moisture and avoid the need to seed during this vulnerable period. However, certain regions are susceptible to excess moisture and cool temperatures on a regular basis and may not be suitable for no till (for example, Red River Basin in Manitoba). Climate change may result in increased risk of excess moisture and cool soil temperature for certain regions in the future.

Significant progress has been made in making no till work for mixed operations that include livestock. For example, low disturbance liquid manure injectors maintain no till benefits and make efficient use of nutrients through proper placement. Research efforts to similarly place solid manure have been more challenging. While uniform broadcasting of pulverized solid manure can work with a no till system, the maximum nutrient benefits cannot be realized without some incorporation using tillage. 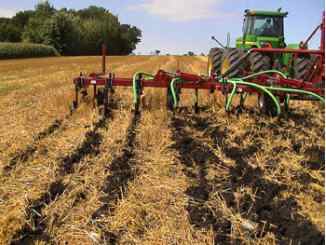 Due to manure's bulky nature, there is a greater risk of soil compaction by applicator equipment. Another challenge relates to the increasing trend toward extended grazing practices such as swath and bale grazing. When these are implemented on annual cropland under wet unfrozen conditions, sinking cattle hoof prints (that is, pugging) can result in increased soil compaction and surface roughness. Tillage is often required to correct these problems to facilitate proper seed placement for the next crop.

Some field crop types are not conducive for no till due to the requirement for considerable soil disturbance during harvest. These include potatoes, sugar beets, and low growing beans. Cropping systems that include vegetables, fruits, nuts and ornamental shrubs require intensive management that often includes tillage for varying reasons. Organically grown crops require tillage, primarily to control weeds that could otherwise be killed by herbicides in a no till system.

Advancement in herbicide technology is one of the primary reasons for successful no till adoption. A key example is the non selective glyphosate herbicide. With conversion to no till there is a general shift in weed spectrum from annuals to harder to kill perennials. Glyphosate and/or other herbicides address most of these weed issues, but there a number of specific weed species in many regions that remain challenging and sometimes require tillage for adequate control (for example, foxtail barley in the dry prairie region).

More recently, genetically modified organism (GMO) technology has led to the development of specific herbicide tolerant crop varieties. While these developments continue to provide incremental benefits, especially to no till producers, there is an increased risk for development of herbicide resistant weeds. While this has occurred to a limited extent in Canada, an increase in herbicide resistant weeds would place no till producers in a more vulnerable position as they don't normally consider tillage as a weed control option.

Some producers also perceive other risks associated with no till and the use of GMO seed and herbicide technology. The high cost of developing and registering these technologies means that seed and herbicide inputs are increasingly being provided by fewer suppliers with sufficient resources to make these investments. This may reduce the number of management options available to producers, in the event that certain technologies develop serious problems (for example, herbicide resistant weeds).

No till can lead to increased challenges for other specific types of pests. Residue borne crop diseases can be more serious under no till, due to increased residue levels and slower decomposition. Certain insect pests such as sawfly are more prevalent under increased residue conditions. Higher moisture conditions associated with no till can increase the incidence of slugs in central and eastern Canada. Finally, while gophers and badger populations on annual cropland in the prairies are not significantly impacted by tillage system, tillage is the only of means of leveling soil mounds that interfere with all field operations.

Increasingly, management decisions for specific land parcels are made by more than one person or farm entity. There is increasing absentee land ownership, long term leasing, short term leasing for specialized crops, and custom work for specific operations. Many specific crop management decisions have future impacts on the ability to successfully implement no till systems. Therefore, it is critical that multiple managers and operators of specific land parcels communicate regularly to ensure that no till systems remain effective.

No till is one of several important cropping technologies that have enabled producers to manage larger land bases. Since the onset of no till in the mid 1980's until 2005 crop input costs have steadily increased and crop commodity prices have remained relatively flat. Recent commodity price increases in 2007 and 2008 have been largely offset by large increases in crop input costs. Therefore, no till has been instrumental in helping producers maintain net farm income, while net income per land area has been shrinking significantly.

If this trend continues there may be a point where various aspects of crop management including no till may become difficult. For example, with increasing land bases it is more difficult for producers to adjust management for increasingly varied soils, landscapes, weather patterns, and cropping histories. However, technologies such as remote sensing, global positioning, and geographic information systems to collect, analyze, and process large volumes of crop management information may facilitate management of large land bases.

No till and reduced till systems have and will continue to be significant beneficial management practices across Canada. Technological improvements and continued extension of information should enable adoption of these practices to continue to increase. However, there are real constraints that will limit the extent of this adoption. There are also some risks, such as climate change, that may cause some of these constraints to increase in the future. Nevertheless, while not all soils, landscapes, climates, or crops may be conducive to no till, all areas and farming systems should be able to at least implement reduced tillage. Also, successful no tillers have learned that a degree of flexibility which allows for discretionary tillage is sometimes necessary and in the long term helps to maximize both environmental and economic benefits.