Control of broadleaved weeds in turf, agriculture, and forestry

Biopesticides derived from living organisms and their naturally-occurring metabolites suppress weeds, plant diseases and insect pests. Biopesticides are classified as ‘reduced-risk’ products by the Pest Management Regulatory Agency because there is less chance of harm to people and the environment than with conventional pesticides. Agriculture and Agri Food Canada (AAFC) is discovering and developing new biopesticide products for registration in Canada and worldwide.

Phoma macrostoma is a fungus that is being developed as a bioherbicide to control broadleaved weeds like dandelion, Canada thistle, and clover. The fungus naturally infects Canada thistle (far right photo), causing plants to turn white. Without chlorophyll, the plants die. When applied as a granule to soil before weed emergence, the fungus causes the emerging thistles to come up white (top left photo). The fungus has been isolated and purified from plants growing in Saskatchewan and other provinces by AAFC scientists (bottom left photo).

A DNA-specific marker for Phoma macrostoma showed that the fungus can be found in weed roots and in the 1 to 8 cm deep soil profile. However, the fungus was not detected in the 30 and 60 cm soil margins beyond the treated area. Phoma macrostoma did not move from the site of placement, thus reducing the risk to non-target plants and organisms.

The fungus was detected in soil at 1, 2, and 4 months after application, but it was not detected after 12 months. The population of Phoma macrostoma declined with time showing that it was not competitive with other naturally-occurring soil microorganisms and fauna.

Phoma macrostoma will not harm susceptible crops like field pea if grown one year after application as the fungus is not persistent in the soil. 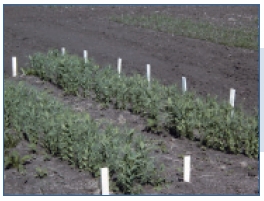 Municipal and provincial bans of conventional herbicides in urban centres and the appeal of organic food have created a demand for alternative weed control strategies (between June and August).