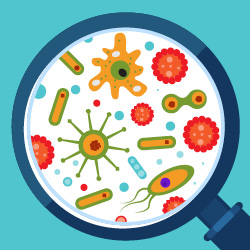 Antimicrobial resistance (AMR) is what happens when microorganisms (such as bacteria or fungi) become resistant to most available treatments—and it is one of the most serious health threats facing the world today. It has the potential to affect not only human health, but animal health, food safety, the environment and even global trade.

Existing antimicrobials (such as antibiotics) are becoming less and less effective. If nothing changes, it is estimated that by 2050, AMR may cause 10 million deaths per year worldwide.

Fighting AMR is an international priority, and the World Health Assembly has adopted a global action plan. As well, in September 2016, the United Nations General Assembly discussed bringing international engagement on AMR to the highest levels of government. It was noted that an integrated, collaborative approach at national and global levels is needed.

Canada and its international partners are working together to help Canadian farmers reduce the use of antimicrobials, protect human and animal health, ensure antimicrobials remain effective, and to develop innovative responses to the risks posed by AMR.

On September 5, 2017, Tackling Antimicrobial Resistance and Antimicrobial Use: A pan-Canadian Framework for Action was released by Ginette Petitpas Taylor, Minister of Health, and Lawrence MacAulay, Minister of Agriculture and Agri-Food. Developed jointly with the provinces and territories and other key partners in the human and animal health sectors, the Framework is meant to guide collective action in tackling AMR in Canada. It identifies opportunities and goals under four pillars: surveillance, stewardship, infection prevention control, and research and innovation.

Antibiotic resistant bacteria in food-producing animals can have significant consequences for not only food safety but the overall health of animals. Good farm hygiene and animal health practices can reduce the need for antimicrobials and allow farm animals to better naturally withstand diseases. Canadian farmers who take action by adopting AMR infection prevention and control practices can help ensure livestock health and be more confident in their products being sold.

AAFC also supports research to improve animal production practices, disease prevention and treatment, vaccine development, and to help producers remain competitive while reducing antimicrobial use. Ultimately, the aim is to reduce the need for antimicrobials in farming and improve our understanding of how AMR develops.