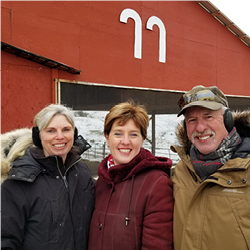 Only days after becoming the first female federal Minister of Agriculture in Canada's history, Minister of Agriculture and Agri-Food Marie-Claude Bibeau was out meeting with farmers, processors and industry leaders. Minister Bibeau, who represents a rural constituency in Quebec, had the opportunity to talk to a number of key stakeholders who gave her an even better understanding of the scope of Canada's thriving agricultural sector.

In these meetings, Minister Bibeau gained valuable insights about how Canada can best capture the many growth opportunities in the sector. For example, in British Columbia she met with cattle and fruit farmers and learned about the challenges they face in growing their businesses. She also talked about the Government of Canada's investment which will help keep the B.C. fruit industry on the cutting edge.

Minister Bibeau also travelled to Calgary, where she delivered the keynote address at the Advancing Women in Agriculture Conference. She highlighted the government's ongoing commitment to creating a diverse, inclusive economy for women in the sector and also announced Farm Credit Canada's new Women Entrepreneur Program, which supplies women with the capital they need to grow their business.

While in Manitoba, Minister Bibeau held her first face-to-face meeting with her provincial counterpart, Minister Ralph Eichler, and announced an investment in the Canadian International Grains Institute to further promote Canadian crops to international markets.

Later on, Minister Bibeau travelled to Saskatchewan, where she was joined by Minister of International Trade Diversification Jim Carr, to meet with agricultural industry leaders and their provincial counterparts to discuss priorities for Saskatchewan's agriculture sector, including canola exports. The ministers reaffirmed the Government of Canada's commitment to work through all available channels to resolve the disruption of Canada's canola seed exports to China as quickly as possible.

A Canola Working Group has also been formed to ensure a coordinated and collaborative approach towards resolving this market access issue. The group is being co-chaired by the Canola Council of Canada and AAFC.

Learn more about Minister Bibeau and her mandate.