Grain safety program gets off the ground 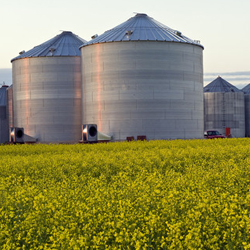 Grain is the lifeblood of most farming operations, and the need to grow more of it in response to world demand is good news for Canadian farmers. Unfortunately, this increase in production, handling and storage has been accompanied by a growing number of grain entrapments (workers becoming submerged in grain, which often leads to death by suffocation). According to media reports, in 2015 alone, there were seven deaths and two injuries connected with grain across Canada. To put this in perspective, there were 17 deaths over the 23 years from 1990 to 2012.

In the United States, extensive grain safety training is offered to producers, including training in grain extraction, confined spaces, grain dust, and lockout-tagout procedures (to ensure dangerous machines are shut off properly when not in use). But until now, programs like these have not existed in Canada.

The Canadian Agricultural Safety Association (CASA) has responded with a grain safety program known as "BeGrainSafe". At its heart is a mobile unit which will be the first in Canada and is modelled after U.S. units. This unit will serve three purposes:

Coming soon to a trade show near you

The "BeGrainSafe" program includes a trade show component designed to demonstrate grain entrapment and communicate the hazards of confined spaces and mechanical dangers. It also offers interactive table-top displays to engage youth (and their parents).

The program will be supported by a microsite with an online calendar, information, learning materials and more.

CASA launched the program in January 2017 at Manitoba Ag Days in Brandon. It will start in the three Prairie provinces and visit as many major farm shows over the course of the next few years as possible.