Parliamentary Secretary to the Minister of Agriculture and Agri-Food 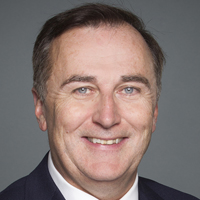 Neil Ellis was first elected as the Member of Parliament for the Bay of Quinte in 2015.

Born and raised in Belleville, Ontario, Mr. Ellis has had a long history of contributing to the Bay of Quinte community. He owned and operated a successful local business for nearly 30 years, and served two terms as Mayor for the City of Belleville. He has been a strong advocate for local infrastructure investments, which he sees as a key to promoting economic growth and creating a better quality of life for local residents.

In 2010, as Mayor of Belleville, Mr. Ellis championed the construction of the Veterans Memorial Bridge over the Moira River, named in honour of Canadian military veterans. In 2012, he was made a Honourary Major of the Hastings & Prince Edward Regiment for his service to veterans in Belleville and the surrounding area.

A committed leader, he also championed innovative strategies to address a shortage of family physicians and other health practitioners in the region, in addition to helping to improve local infrastructure.

He and his wife, Susan, have raised three children: Zachary, Maddison, and Abigail.

Minister of Agriculture and Agri-Food